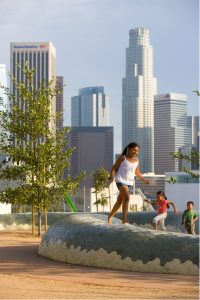 In 2016, the State Coastal Conservancy pioneered an Urban Greening grant round for Los Angeles county, allocating $11.5 million to 12 projects that:

“Through these grants, the CNRA is allocating over $23.5 million to projects in LA County that will make an extraordinary difference in some of California’s most underserved and park-poor communities.” Said Joan Cardellino, South Coast Program Manager at the State Coastal Conservancy. “We have been designing and funding Urban Greening projects in Los Angeles since 2008, and initiated our LA Urban Greening grant round last year to catalyze exactly these sorts of projects, and we couldn’t be happier about this major influx of funding coming from the CNRA.

“Urban Greening is a relatively new concept for city planners and land managers, but I have no doubt that the projects we and the CNRA are supporting will quickly prove the value of these programs in terms of ecological indicators and direct benefits to communities.”

The Coastal Conservancy recently held a grant round for Urban Greening projects in the San Francisco Bay Area.