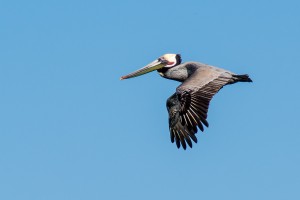 Brown Pelican in flight at Moss Landing by Don DeBold

Ten projects to protect and restore coastal habitats and coastal watersheds up and down the State of California will be recommended to the board of the State Coastal Conservancy as part of the first round of funding from the Water Quality, Supply and Infrastructure Improvement Act of 2014 (Proposition 1).

These projects, detailed below, range from native oyster restoration in San Diego Bay to protection of land in Salinas to restoration of wetlands in South San Francisco Bay to restoration along the Lower Eel River. The Coastal Conservancy is conducting quarterly grant rounds with the Prop 1 funds. This first round resulted in a recommendation for ten projects totaling over $4 million. The second round of proposals, focused on anadromous fish restoration, are being evaluated now, and a third request for proposals will be announced soon. It is anticipated that Prop 1 grant rounds to fund multi-benefit ecosystem and watershed protection and restoration projects will continue for five years.

“The coast is critically important to California’s life and economy,” said Sam Schuchat, the Coastal Conservancy’s executive officer. “These grantees will help restore our coastal ecosystems and coastal watersheds for the multiple benefits they provide to wildlife and people and help implement the California Water Action Plan.”

The Coastal Conservancy is a state agency that works with the people of California to protect and improve the coast and San Francisco Bay. The conservancy has helped open more than 100 miles of coast and bay shores to the public and preserve more than 300,000 acres of wetlands, wildlife habitat, parks, and farmland.  More information about the Coastal Conservancy’s grant programs can be found here.