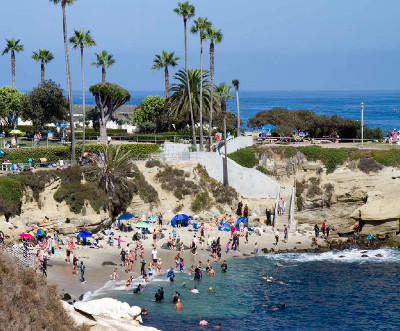 The California South Coast region extends from Ventura County to the Mexican Border and includes the counties of Los Angeles, Orange and San Diego. It is known for its sandy beaches, surf-able waves, moderate climate, and large and diverse population. The region is defined by the coastal plains of several major rivers and is bounded by the Transverse Mountain Ranges that include the Santa Monica and Santa Susana Mountains. The south coast of California has extremely high levels of species diversity, many of which are unique to the region, and the greatest number of threatened and endangered species in the state.

The beaches of the south coast are world famous recreational destinations that attract millions of visitors annually and are a major contributor to both the economy and the quality of life in the region. Southern California beaches typically receive over a million visitors each year.

Southern California is also home to about 24 million people. The two largest cities on the west coast, Los Angeles and San Diego, are located in southern California. This proximity of dense urban development and sensitive natural areas creates a unique set of issues for the Conservancy to address in this region.

Expanding opportunities to access the coast and beaches, restoring coastal marshes, and providing parks and trails along rivers that connect to the coast are the key priorities for the South Coast Program. With the exception of Ventura County, the coastal areas LA, Orange and San Diego are extensively urban, so providing areas of respite for people and wildlife is critically important.

Click on the links below to find out more about the Coastal Conservancy’s work.