September 7, 2018 – This week, 200 oyster reef elements were placed at 4-acre submerged site at the former Red Rocks Warehouse at Point San Pablo in the City of Richmond to create a living shoreline.

The State Coastal Conservancy is leading the San Francisco Bay Creosote Piling Removal and Pacific Herring Restoration Project in partnership with the National Fish and Wildlife Foundation, the City of Richmond, Ducks Unlimited, and other partners.

In 2016, the project removed than 441 tons of debris, including 413 creosote-treated piles, and more than 35 tons of concrete and collapsed decking from the site. Derelict wharfs and creosote pilings are a major marine debris and contaminant problem that is impacting natural habitats in San Francisco Bay, and negatively impact Pacific herring and other aquatic species.  Creosote-treated wood has been shown to impact the early life stages of Pacific herring, who lay their sticky eggs on vegetation and on hard surfaces including pilings. In September 2018, the Conservancy started construction on a living shoreline restoration phase that will include the placement of 200 reef structures for native oyster habitat and shoreline protection.  In Spring 2019 eelgrass plantings will occur to further improve habitat for Pacific herring, salmon, fish, birds, and a variety of species in the bay.

“Living shorelines use nature-based infrastructure to protect shorelines in the face of sea level rise and increased storm surges while creating habitat for wildlife.” said Marilyn Latta, Project Manager for the Coastal Conservancy. “While this is still a pilot project, we see this approach as a great solution to protecting communities while also improving the water quality of the Bay and health of fish populations.  What happens underneath the surface of the water has a huge impact on the overall condition of the Bay.”

The $2 million dollar project is funded by the National Fish and Wildlife Foundation (NFWF) through its San Francisco Bay Estuary Conservation Fund, which was established with community service payments from the settlement of multiple criminal environmental cases prosecuted by the United States Attorney’s Office for the Northern District of California, including United States of America v. Fleet Management Limited, involving the Cosco Busan ship collision into the San Francisco-Oakland Bay Bridge that resulted in an oil spill in San Francisco Bay.

“This was a critical project to be funded through our San Francisco Bay Estuary Conservation Fund,” said Stephanie Tom Coupe, Senior Director of NFWF’s Impact-Directed Environmental Accounts department. “We chose it because it’s innovative and has multiple benefits for the bay, especially for Pacific herring and its habitat.”

The installation is being completed by construction manager Ducks Unlimited and marine contractor Dutra. Dutra conduct the work via a barge and crane, which lower the oyster reef elements into the water.  The oyster reef elements were constructed from June-August in Antioch by a diverse set of partners, including the CA Wildlife Foundation, Dixon Marine Services, Reef Innovations, Civicorps, and the North Bay Conservation Corps.

“Ducks Unlimited is proud to partner on this elemental yet innovative project to restore subtidal habitat. This represents a crucial step in scaling up natural shoreline protection while also providing immediate and lasting benefits for fish and waterfowl, particularly eelgrass, Pacific herring, and diving ducks. Implementation continues Ducks Unlimited’s commitment to the overall protection and restoration of wetlands in the Bay Area.” Said Renee Spenst, PhD, Regional Biologist with Ducks Unlimited

The project will be monitored by the Coastal Conservancy to gather data on the success of native oyster establishment and future eelgrass plantings, and the spawning use by Pacific herring. Pacific herring are a linchpin species that support bird and other wildlife populations.  This innovative demonstration project is testing a combined piling removal and living shorelines approach at the same site, with a goal of encouraging other cities and partners to undertake this kind of marine debris and habitat restoration project at additional sites in the bay. 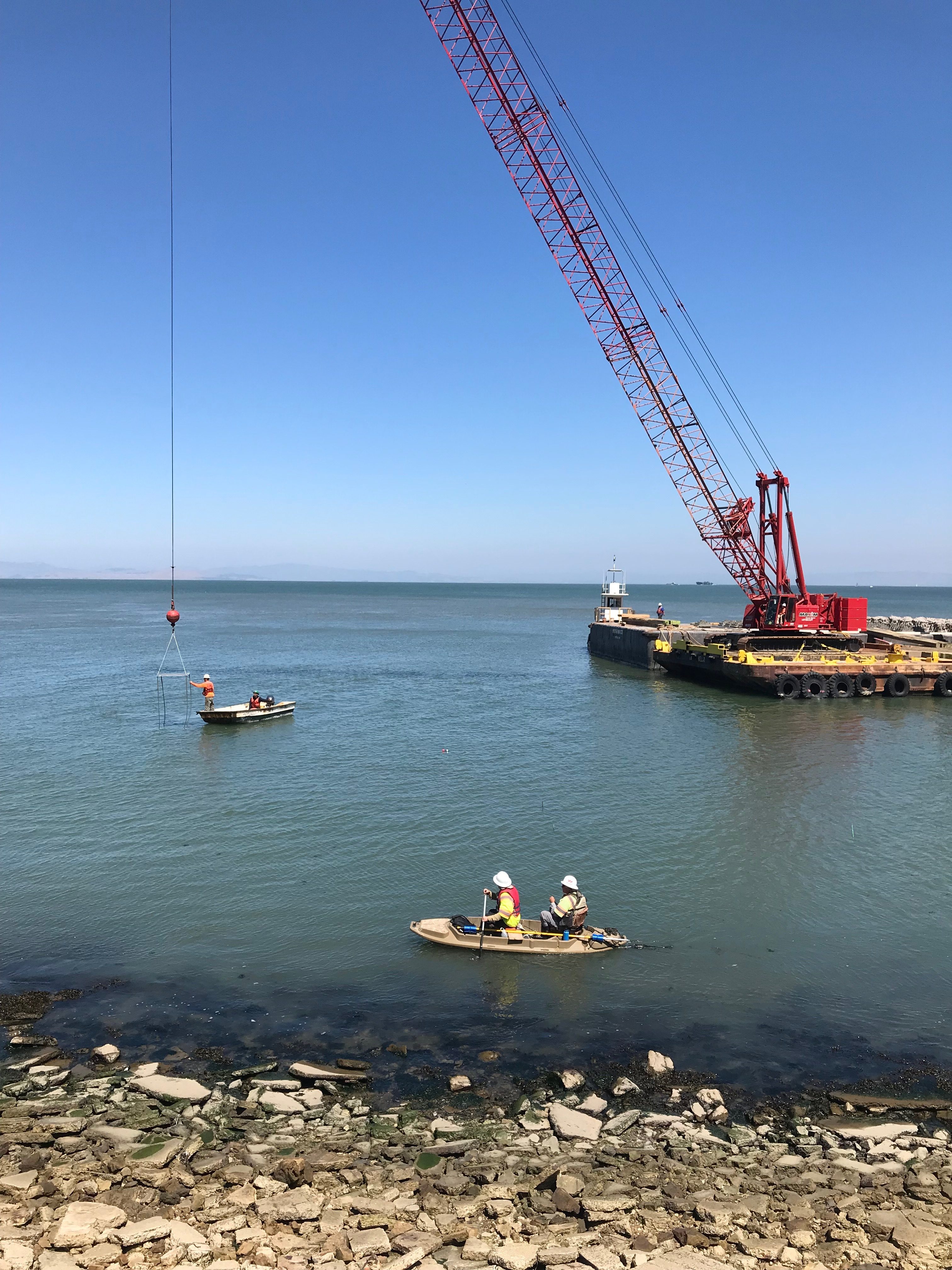 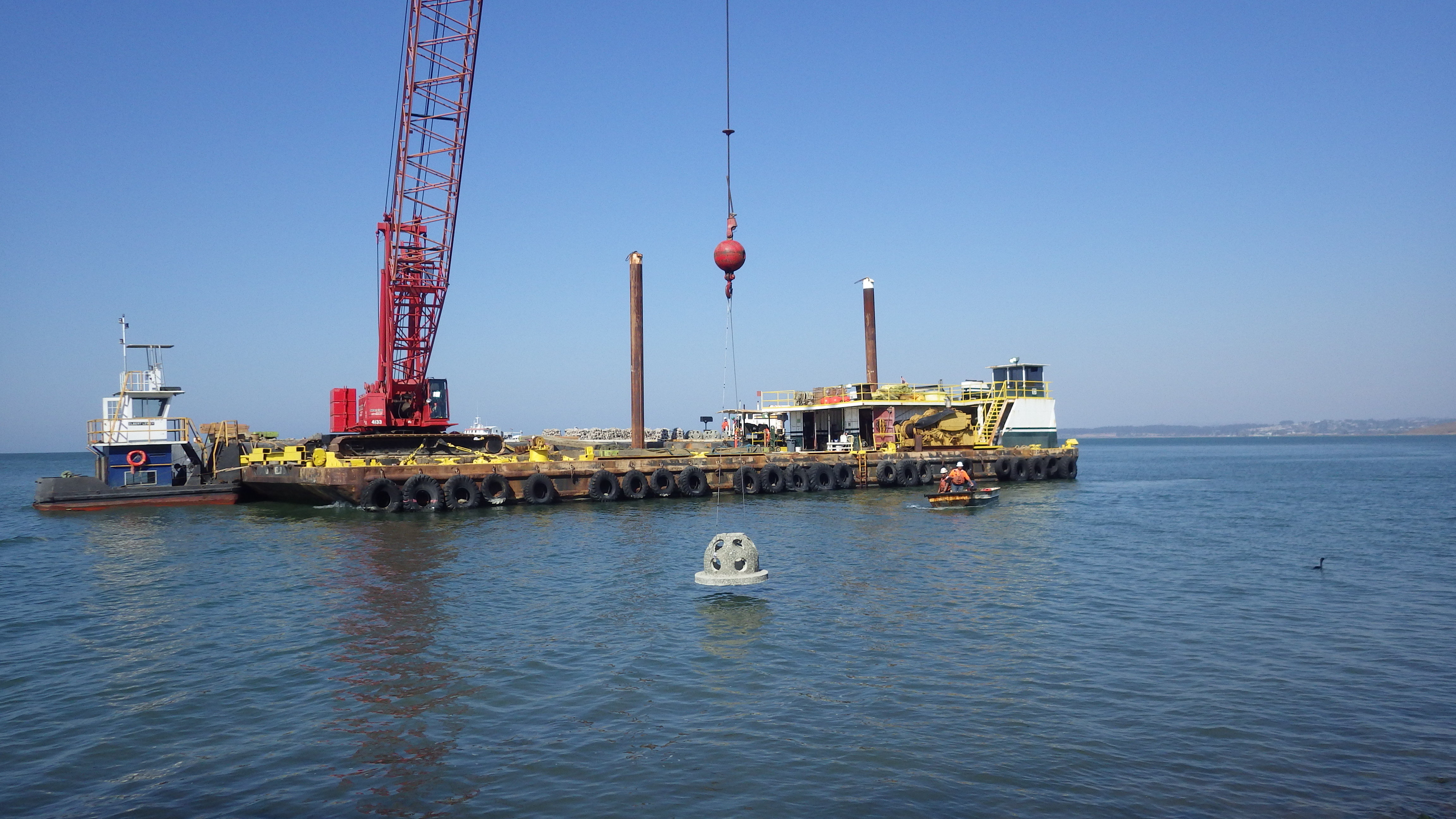 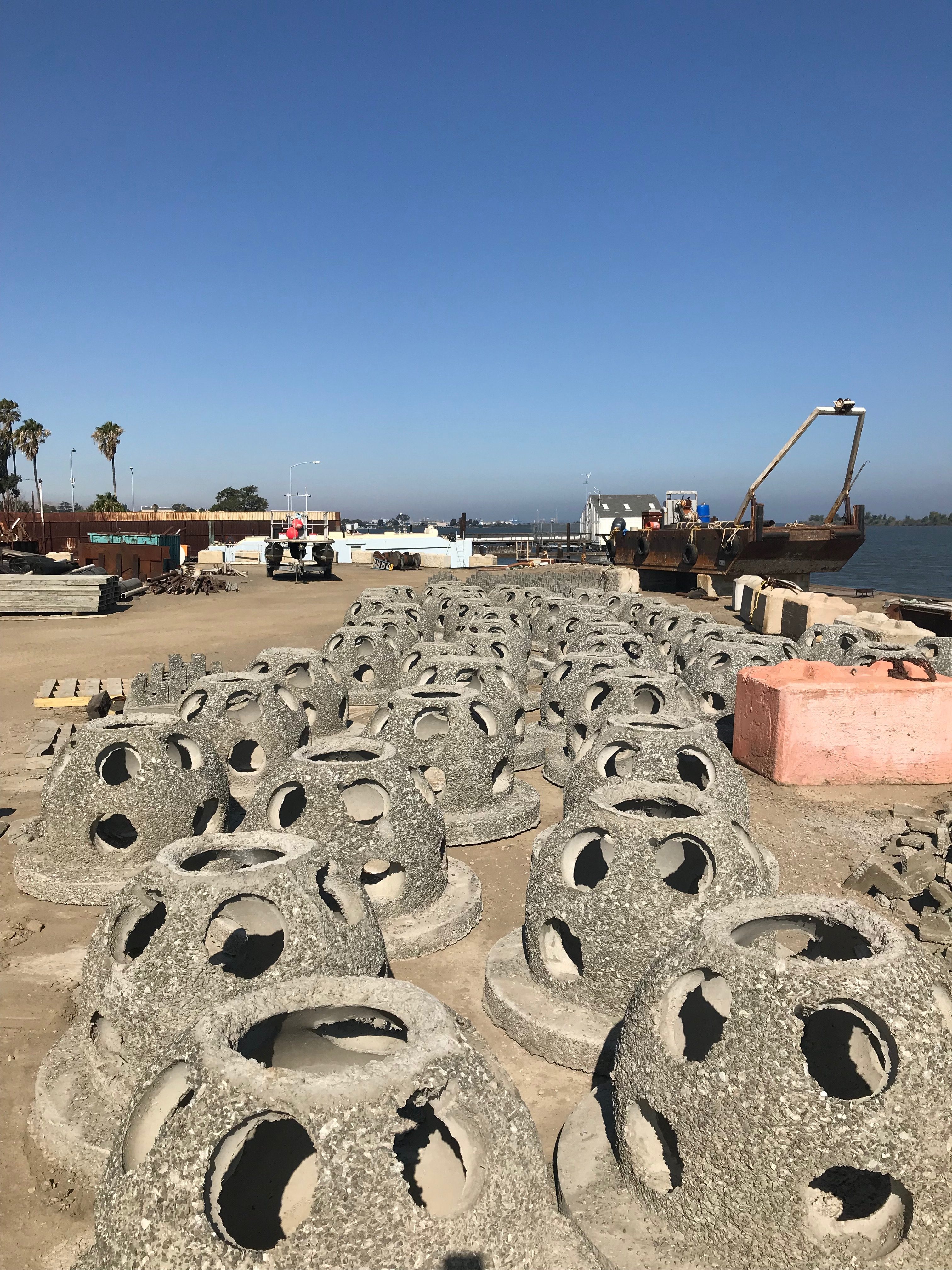 Reef Balls ready to be installed.