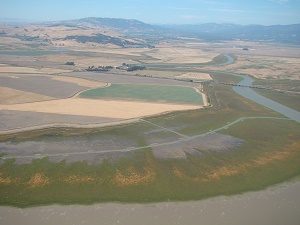 The Sonoma Creek Enhancement Project is improving a 260-acre area of tidal marsh that has been degraded from a levee built in the early 1900s that has collected gold rush era hydraulic mining and stagnated the marsh, causing it to have poor quality habitat for endangered and threatened species and foster high rates of mosquito production.

In this project, tidal flow was introduced into the marsh through the excavation of a 1-mile channel to Sonoma Creek, thus improving ecological function and reducing mosquito populations.

A habitat “transition ramp” was built, providing a gently sloped transition to a levee in place of a traditional levee design. This habitat transition ramp serves as a natural climate adaptation feature to provide flood protection while allowing habitats and species to migrate upslope as sea levels rise.

A gently-sloped habitat “transition ramp” from the tidal marsh to levee will: 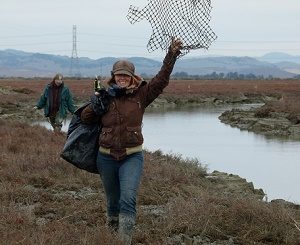 Permitting fill of an existing wetland to create a transition ramp: To build the sloped habitat levee, the highest portion on the sloped levee (a 1-foot wedge) had to be converted from tidal marsh to upland habitat. Although “fill” of an existing wetland is not usually permitted in the bay, an experimental permit from the Bay Conservation and Development Commission (BCDC) was granted to create this resiliency feature for the project. Good partner relationships and communication were crucial to obtain a total of 7 permits needed for this innovative project.

Costs: $2.7 million, of which 70-80% went to contractors for physical construction. Buying materials to build the construction accessway on the marsh was a large cost.

Timeline: Five years to acquire permits (funding for pre-planning and the permit acquisition from EPA) and four months to construct in fall 2015

Back to Natural Infrastructure