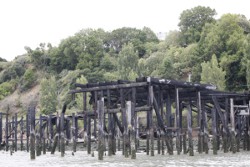 The draft IS/MND is now available for public and agency review and comment. The comment period lasts 30 days from February 16, 2016, through March 17, 2016.

The project would take place within the Central and San Pablo Bay portions of San Francisco Bay, and would be implemented in two major phases:

Creosote-treated piles are often used by herring as a spawning substrate, but the polycyclic aromatic hydrocarbons creosote releases has toxic effects on the fish. Pile removal therefore not only removes a toxic substances from the waters of San Francisco Bay, but also reduces the navigational hazard from piles, decking, and other elements of the derelict wharves and other structures below the water line. That harmful spawning substrate will be replaced by beneficial substrate in the form of eelgrass and rockweed beds, and native oyster reef structures to provide a variety of habitat benefits.

The Draft Initial Study and Mitigated Negative Declaration pdf document can be downloaded or hard copies of the draft IS/MND are available at the State Coastal Conservancy’s office at 1330 Broadway, 13th floor, Oakland, CA, 94612, and at the four libraries listed below. Comments may be submitted to Marilyn Latta, Project Manager at the State Coastal Conservancy at the address above, or electronically at marilyn.latta@scc.ca.gov. Following the comment period, input from the comments received will be used to revise the document, after which a final CEQA document would be prepared.

The draft IS/MND is available at the following libraries: