The Conservancy at 40 Years: Fort Bragg 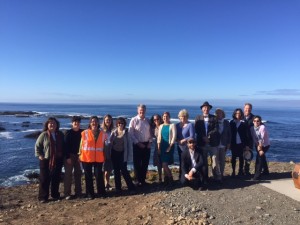 How many stretches of the California Coastal Trail feature a dynamite shack?  Fort Bragg may have the only one in California! The innocuous looking concrete structure stands on the edge of the bluff in Noyo Headlands Park, the home of the city’s newly opened four mile Kah Kahleh trail, part of the Coastal Trail.  The shack once housed the explosives used to break up logjams on the Noyo, Ten Mile, and other rivers and ensure a steady flow of logs to the mill that was built here in 1857. As you stand on the edge of the bluff today, the waves crashing on the offshore rocks and the cries of the seagulls are the loudest sounds you’ll hear.  It’s hard to imagine the sights and sounds of the busy lumber mill that employed many of Fort Bragg’s residents until Georgia Pacific shut it down in 2002.

The mill’s closure was a challenge and an opportunity for the City, and it turned to the Coastal Conservancy to help plan for the future. A Conservancy planning grant helped the community look at the whole mill site, much of which will someday become residential and commercial areas.  Over 300 people participated in the planning process. One of the biggest ideas to emerge from the process, and the first one to become reality, was Noyo Headlands Park.  The Park is made up of about 100 acres of coastal prairie, beaches and bluff.  The community realized that the Park would be not just a tremendous amenity for City residents, but would also help Fort Bragg transition from a resource-based economy to one where tourism was much more important.  The park, and the coastal trail that runs through it, open miles of Fort Bragg’s coastline that had been closed to the public for more than a century.

The City acquired the parkland from Georgia Pacific in 2009 with the help of a $4.1 million grant from the Conservancy.  Detailed planning for the coastal trail followed soon after the acquisition, with more community participation.  Cleaning up hazardous waste left behind by the mill was one of the biggest challenges, and many options were considered, including using oyster mushrooms to break down dioxins left on the site.  Finally the parkland was clean, plans were in place, and permits were in hand.  With funding from the Conservancy, State Parks, and Caltrans, the City started construction on the trail in 2014.  Two years later, the 4.5 mile trail is complete and is already well used by people of all ages, from seniors in wheelchairs to little kids on scooters.  You can make your way down the cable steps to a little pocket beach, contemplate your mortality by the historic Fishermen’s Cemetery, climb to the top of Johnson Rock, and watch the water churn in Skip’s Punchbowl. Or just take a seat on one of the many artistic benches made by local artisans- I like the one shaped like a whale myself- and enjoy the view. 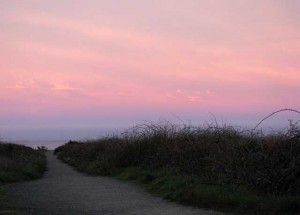 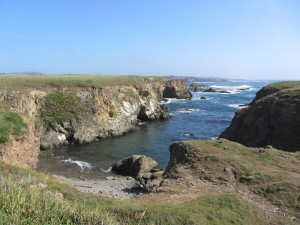 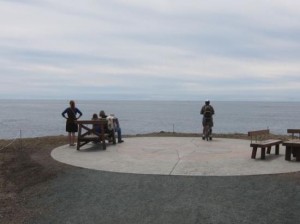