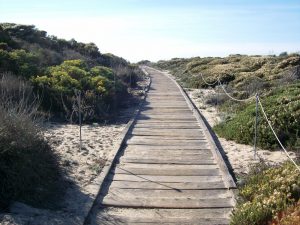 “Larry and Paul have been steadfast in their dedication to the completion and public enjoyment of the California Coastal Trail” said Sam Schuchat, Executive Officer of the California State Coastal Conservancy. “The Coastal Trail is a magnificent public resource that will one day stretch from Oregon to Mexico.  People like Larry and Paul, who have dedicated so much of their time to the trail’s expansion, make this vision come closer to reality each year.”

During his 35 year career with State Parks in the Santa Cruz and Monterey Districts, Larry Tierney consistently went above and beyond his duties supporting efforts to expand the Coastal Trail.  In 2007 he led the way in establishing a Monterey District Trails Crew, helping with funding and the creation of new positions.  From his work on trails around Pt. Lobos to the Garrapata Coastal Trail in Big Sur, Larry has been a leader in developing Coastal Trail in the Monterey Bay region.

Paul Jenkin, the Ventura Campaign Coordinator for the Surfrider Foundation and founder of the Matilija Coalition, has volunteered thousands of hours over many years to promote the development of the Coastal Trail in Ventura County and restore the region’s coastal and river ecosystems. Paul was the project lead for Surfrider on the Surfer’s Point Managed Retreat Shoreline project for which he helped bring agency and community stakeholders together to move the parking lot and pedestrian/cycle path away from the tideline. The design concept is “planned retreat” – relocating development further inland and away from areas likely to be affected by coastal erosion – and the Surfer’s Point project represents one of only a handful of major trail projects ever built in the California to apply this concept.

“The work that Paul and Larry have done demonstrate the variety of ways people can contribute to the health and recreational resources of their communities through trail projects,” said Una Glass, Executive Director of the California Coastal Trail Association. “We want to make the trail accessible for all Californians, whether they’re out for a season-long thru-hike or just an afternoon stroll.  Paul and Larry have been outstanding leaders in delivering projects to connect people to the coast.”

The California Coastal Trail (CCT) is one of the pre-eminent trails in our nation and was designated as federal Millennium Legacy Trail in 1999. It is used for recreation as well as alternative transportation and is increasingly seen as an economic asset to local communities as a tourist attraction and community amenity. The CCT takes a variety of forms designed to fit the surrounding environment, level of use, and available land rights. Whenever possible, the trail is designed to accommodate hiking, biking and equestrian use and be fully accessible. To achieve this, in many areas the trail consists of a braided network of trails.
To learn more, please visit: http://coastwalk.org/ and https://scc.ca.gov/projects/california-coastal-trail/