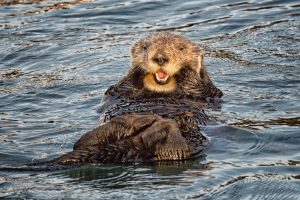 The California State Coastal Conservancy awarded over $4.6 million in grants to protect, restore and enhance coastal resources at its November 30 Board meeting.  Included in these grants was nearly $100,000 in Sea Otter Recovery grants to 3 programs to protect and restore sea otter populations off the California coast.

The Sea Otter Recovery grant program, funded by voluntary income-tax check-offs, has been running since 2006 and has been able to award a total of $1,154,897 (which was matched by an additional $1,554,333) to help scientists better understand and trace the causes of sea otter mortality, identify factors limiting population growth, reduce water pollutants that are toxic to otters, develop wetland management and restoration guidance to aid in otter recovery, and educate the public how they can prevent disturbance of wild otters.

The programs funded at the November meeting include:

Southern sea otters were hunted to near extinction in the early part of the 20th century, and listed as a federally threatened species in 1977. Currently the population numbers around 3,186 animals inhabiting the near-shore marine environments adjacent to San Mateo County south to Santa Barbara County. This is far less than the historic levels estimated at approximately 16,000-20,000 animals, with a range along the entire California coast and south into Baja California.

To learn more about each project and see the full list of grants awarded by the Coastal Conservancy in November, visit https://scc.ca.gov/2017/11/17/coastal-conservancy-public-meeting-in-santa-barbara-november-30/