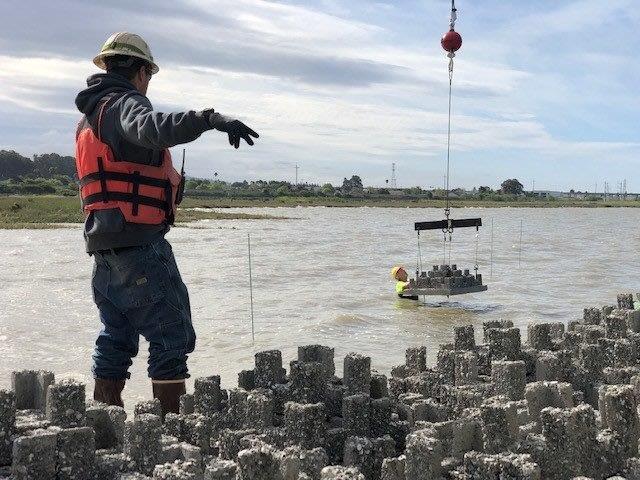 Richmond, CA – From April 9-30, 350 oyster reef elements are being placed in nearshore areas to create a living shoreline near Giant Marsh at Point Pinole Regional Shoreline managed by East Bay Regional Park District in the City of Richmond.  Eelgrass beds will be planted next to the reefs in the following weeks to create a habitat ideal for the recruitment of native Olympia oysters and other aquatic species.

Living shorelines use nature-based infrastructure to create shoreline buffers that reduce the impacts from sea level rise and erosion, while creating habitat for fish and wildlife. Though a relatively new climate adaptation technique, living shorelines are proving to be an effective approach to protecting coastal resources and shoreline communities.

The Giant Marsh project is one of a small number of living shoreline trial projects taking place in the San Francisco Bay, but is the only one that connects the submerged underwater habitats with adjacent wetlands and upland ecotone plant communities.  This innovative demonstration project is testing a combined living shorelines approach with habitat elements at different tidal elevations at the same site, with a goal of encouraging other cities and partners to undertake this kind of climate adaptation habitat restoration project at additional sites in the bay.

The multi-habitat project at Giant Marsh builds on lessons learned from the Coastal Conservancy’s living shoreline project constructed directly across the bay in San Rafael in 2012, which included the construction of oyster reefs and eelgrass beds.  The next phase approach at Giant Marsh integrates subtidal habitat restoration of native oyster (Ostrea lurida) and native eelgrass (Zostera marina) beds with designs that test the use of these natural structures to buffer and protect adjacent tidal wetlands of Giant Marsh, in combination with additional restoration treatments in the tidal marsh that include plantings of native Pacific cordgrass and the endangered California seablite plant, and higher elevation plantings in the upland ecotone transition zone. Each of these areas are critical habitat zones of the San Francisco Bay shoreline vulnerable to sea level rise and shoreline erosion.

“We are so excited to work with such a great group of partners on this next phase living shorelines effort.  It truly takes a village to design, permit, and construct habitat features in shallow bay waters.” said Marilyn Latta, Project Manager for the Coastal Conservancy. “While this is still a pilot project, we see this approach as a great solution to protecting our shoreline while also providing local jobs and educational opportunities that can include Conservation Corps groups, small companies, and university students.  This is a living laboratory and by carefully testing pilot methods, we can learn which methods will work best to move forward with larger scale reef projects in San Francisco Bay.”

Reef Elements after being placed

“This integrated climate adaptation approach includes strong science-based design and monitoring, and directly implements and a variety of regional habitat recommendations that benefit waterfowl and salmon and many other species in the bay.” said Matt Graul, Chief of Stewardship at the East Bay Regional Park District.

Giant Marsh is directly adjacent to newly restored Dotson Family Marsh, all part of the Point Pinole Regional Shoreline and an area of rich cultural history and current sea level rise adaptation efforts.  The project is using a combination of state Conservancy and federal grant funding to implement this innovative integrated enhancement project, that includes multiple native habitat elements to increase vertical habitat structure and food availability for birds and aquatic species, while also testing new approaches to climate adaptation and shoreline protection in the face of sea level rise.  These actions are recommended as part of the North Richmond Shoreline Vision, completed by the San Francisco Estuary Partnership and many local, state, and federal partners in 2018.

The $3 million dollar project is funded by the State Coastal Conservancy, the Ocean Protection Council, a US Fish and Wildlife Service National Coastal Wetlands Conservation grant, and oil spill funds from the Cosco Busan Trustee Council through the National Fish and Wildlife Foundation.

“This was a critical project to be funded through our San Francisco Bay oil spill restoration efforts,” said Natalie Cosentino-Manning, Restoration Program Manager with NOAA Fisheries Restoration Center. “We chose it because it’s innovative and has multiple benefits for the bay, especially for native Olympia oysters and their habitat.”

The project will be monitored by the Coastal Conservancy to gather data on the success of native oyster establishment and future eelgrass plantings, and to construct the additional tidal marsh and upland transition zone plantings. Native oysters are a keystone species that support fish, crabs, bird and other wildlife populations.

The oyster reef installation is being completed by construction manager Ducks Unlimited, a national non-profit conservation organization, and marine contractor Triton Marine from Washington State, local partner CS Marine, and others. Triton conducts the work via a barge and crane, which lowers the oyster reef elements into the water.

The 350 oyster reef elements are made of a mixture of native sand and oyster shell mixed with cement, and were constructed from June-August 2018 in Antioch by a diverse set of partners, including the CA Wildlife Foundation, Dixon Marine Services, Reef Innovations, CiviCorps, and the North Bay Conservation Corps.

The construction of oyster reefs and living shorelines is a key recommendation as part of the San Francisco Bay Subtidal Habitat Goals Project (www.sfbaysubtidal.org) and the Baylands and Climate Change Report (www.baylandsgoals.org).   The project is permitted by NOAA, the Army Corps of Engineers, the San Francisco Bay Regional Water Quality Control Board, the SF Bay Conservation and Development Commission, the State Lands Commission, East Bay Regional Park District, and others.