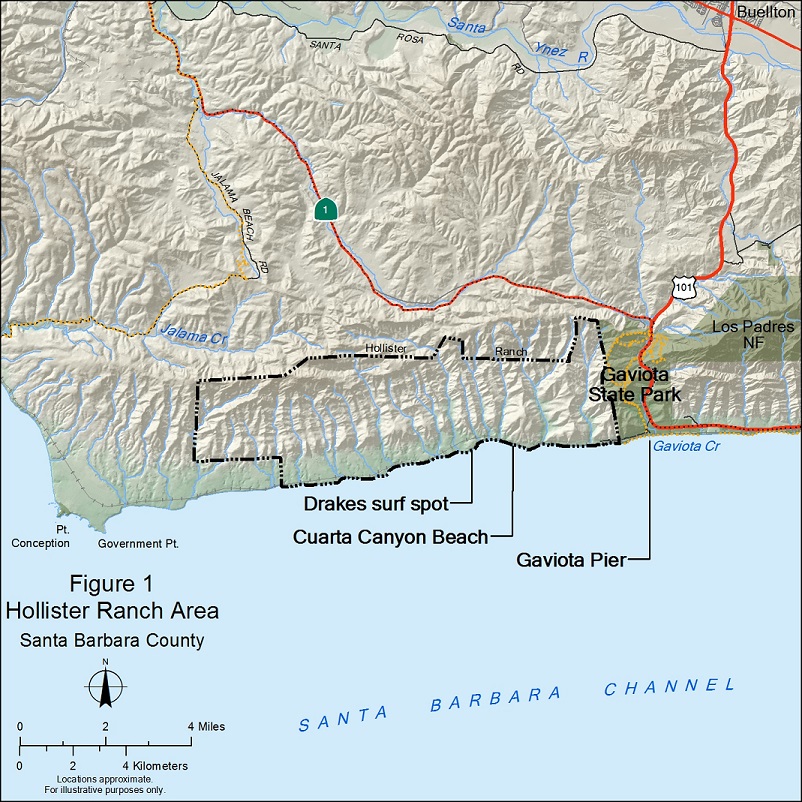 The Hollister Ranch is a 14,500-acre subdivision that includes 8.5 miles of publicly owned shoreline along the Santa Barbara Channel, in Santa Barbara County, with no land-based coastal access for the public. The Gaviota Coast, of which Hollister Ranch is a significant part, is the least accessible stretch of coast in California, with less than 2 miles of publicly accessible shore in more than 60 miles of coastline.

The staffs of the California Coastal Commission, California Department of Parks and Recreation, State Lands Commission and State Coastal Conservancy have entered into an interagency Collaboration Agreement to further the State of California’s public policy of responsibly expanding and enhancing the public’s access to and along the coast and the public’s cultural, educational and recreational experiences at the Ranch.

Working together, these four state agencies have initiated a public access planning process. The initial goals of this process include: 1) engaging a wide variety of stakeholders in a collaborative  planning process; 2) developing an over-arching shared vision for public access at Hollister Ranch that will guide development and implementation of the program; 3) ensuring that the vision and program provide for diverse, equitable, and inclusive access that meets the needs, interests and concerns of as broad a range of Californians as possible;  and 4) developing a program that can be feasibly implemented in light of the property’s physical and environmental characteristics, regulatory requirements, private property interests, public safety and other identified constraints and interests.

At its October 17, 2019 meeting, the Coastal Conservancy Board approved a staff recommendation to allow use of $300,000 provided to the Conservancy by State Parks for the collaborative planning effort.

If you would like to be included on the email list for the planning process, please send an email to Trish Chapman.

The California State Coastal Conservancy (SCC) is seeking qualifications for potential cultural resources/archaeological services contractors to prepare a Cultural and Tribal Resource Technical Report (Technical Report) of the draft Hollister Ranch Coastal Access Program (HRCAP). The scope of work for the Technical Report is to:

1) undertake a cultural and tribal resource survey for the draft HRCAP project area;

2) prepare an ethnographic study; and

3) prepare a report that can be used to complete the existing conditions and impact assessment sections of a Programmatic Environmental Impact Report (PEIR) on the HRCAP. The PEIR will be prepared under a separate contract with the State Lands Commission.

The work will be completed with oversight from SCC, the California Coastal Commission (“CCC”), the State Lands Commission (“SLC”), and the California Department of Parks and Recreation (“DPR”) (collectively referred to as the “State Agency Team” or “SAT”), and representatives from the four Chumash tribes that participate in the HRCAP Chumash Tribal Working Group (CTWG).

SCC’s process of selection for this proposal will follow SCC’s environmental services contracting process, in which SCC solicits a list of contractors referenced by area of specialization, evaluates applications, and then makes a final decision based on demonstrated competence and qualifications. The SAT and CTWG will aid SCC in its evaluation of the applications. SCC will negotiate and manage this contract on behalf of the SAT and CTWG.

Respondents to this Request for Qualifications must submit the information requested below electronically in Microsoft Word or PDF format to: trish.chapman@scc.ca.gov on or before 5:00 p.m. on November 21, 2022. Please limit total file size below 20 MB.

More information can be found in the full RFQ here.

Please email Trish Chapman with questions. Further information on the RFQ will be posted on this website.

Q1          Can we get the shape files for the conceptual plans from Appendix A of the draft HRCAP?

A1           Yes, they are available here. The updated disturbance areas will be larger because they include buffer areas.

A1 Update          Updated maps of the conceptual design areas of potential effect can be downloaded here. The maps are available in both shapefile and kmz format.

Q2          The RFQ states that the “survey … will focus on six potential public beaches …(see Attachment 2 for site maps).” The maps in Attachment 2 depict a teal-colored line that appears to go from Agua Caliente beach to San Augustine beach. Can you confirm that the APE includes the entire beach area highlighted by the teal line? If not, what is the extent of the APE in each beach area?

A2           No, the teal line represents the area below mean high tide that is public beach. The six potential site maps were inadvertently left out of the RFQ. The current site plans are found in Appendix A of the Draft HRCAP.  The updated site maps, including trail impact area maps, can be downloaded here.

Q3          Is updating site records recorded on pre-1995 DPR forms (regardless of whether there is a boundary change) part of the scope of work?

Q4          Can you confirm the contract start and end dates and work completion dates as dates are stated variously in the RFQ Section 4.2 Key Dates and Attachment 3?

Q5          For smaller subcontractors will the Conservancy accept reduced general liability coverage of $1 million rather than $2 million?

A5           The general liability coverage for subcontractors can be negotiated. In most cases we will agree to $1 million rather than  $2 million.

Q6          Concerning the survey area, is there a set buffer distance around the potential project areas (parking, access routes)?

A6           Each area of potential effect (APOE) has been ranked based on the level of development and potential impacts for that area and has been given a buffer of some distance. All of this is captured on the new site plans found here.

Potential trail access routes and any necessary retaining walls have been given a buffer around the centerline of the feature alignment.

Retaining walls have been mapped where they are necessary to support the alignment of a bike lane, hiking trail, or multiuse path. Steeper slopes require taller retaining walls regardless of the type of trail facility and have been categorized as short (30″ or shorter), medium (30″ – 6′), tall (greater than 6′, though not exceeding 9′), and terraced walls (treated as two medium walls).

Regardless of the type of trail facility, the following additional buffers have been applied to retaining walls:

Q7          Will existing roads leading off Rancho Real Road into the access locations be repaved or expanded?

A7           Repaving is likely for existing access roads leading off of Rancho Real Road. These roads have been given an AOPE rank of 2 and a 5′ construction buffer (rank of 4).  Where access roads cross the railroad tracks at-grade, road expansion may be necessary to include a full travel lane in each direction, if it is determined that the railroad crossings need to meet public crossing standards (CPUC requires a full travel lane in each direction at public crossings, though the required length of road with 2 lanes is unknown).